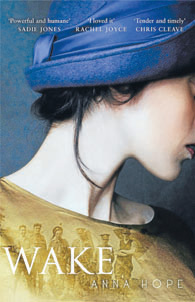 This incredible debut novel from author Anna Hope weaves together the tales of three extraordinary women, Hettie, Evelyn and Ada.

Hettie spends her nights at Hammersmith Palais, dancing for a nickel with gentlemen, Evelyn works at the pensions office, helping soldiers who are struggling since the World War I ended and Ada is a housewife, who has visions of her dead son wandering the streets of her village.

As the plot unfolds over five days in November 1920, the war continues to have a severe impact on the characters’ lives, even more so when a stranger turns up on Ada’s doorstep.

As each story intertwines, Hope captures both the desperation and possibilities the postwar era brings. Each woman is portrayed beautifully, distinctly and with compelling realism.

I fell in love with this book instantly because of its subject matter, style and narration. The part mystery, part love, part war story was blended with grace, making it difficult to believe that it is Hope’s first novel.

Although this is not a story written with letters, it evokes the same emotion as Letters from Skye by Jessica Brockmole and The Guernsey Literary and Potato Peel Pie Society by Mary Ann Shaffer and Annie Barrows.

I cannot wait for Hope’s next novel. Highly recommended.